skip to main | skip to sidebar

For Those Who Still Care

I've not gone away.

Real life has just been consuming any time I might have to write real articles here. Hopefully things will be less hectic sooner rather than later and I can get back to organizing that trading night.

I've also not forgotten about anyone who I owe cards to. I just ask that you please be patient with me. My word is always good and I hope that I can make up for getting my half of trades together so late by finding some really cool stuff to send to you guys.
Posted by Rich at 8:57 AM 2 comments:

Okay, back to basics. Here's every non-base (or black back parallel) I pulled from two hobby boxes, two blaster boxes, and eleven single packs of 2008 Heritage so far. If you see anything you like (except the Carmona and the Beckett, those are for mine and my brother's personal collections) let me know!

Okay, here's where I start to actually plan this thing out.

For everyone who responded positively to the idea of a mass-meeting/trade night via some internet chat room, (and for those who have not yet responded, there's still time!) I pose this question:


Which night of the week works best for you? Figure on setting aside maybe 2 hours for this event.

Holy crow am I frustrated right this second.

I watched what is probably my all-time favorite movie, Searching For Bobby Fischer, the other night and since then I've had a bit of a chess bug. I used to be pretty decent at chess back when I played it a lot (1999-ish). I didn't always win, but I always hung in to the bitter end. Well, nearly ten years of not playing has left me incapable of scoring a victory over even the most novice of chess players.

The reason this is so frustrating is not because I don't like losing. I don't love losing, but if I really feel like I'm playing my best and someone still beats me, I'm not one to whine about it. No, what is so frustrating is that I KNOW FOR A FACT that I'm a better chess player than what I've been putting on display lately would make anyone believe.

And I cannot figure out what on earth is wrong with me. I cannot figure out what I used to do that I'm not doing now. Basically, I know how the pieces move and I've lost everything else I had learned about chess. I have NO idea what happened to my brain in the last ten years, but if my head were an apartment building, I'd be standing outside the door where Mr. Chess Skills lived ten years ago just knocking and knocking, wondering if he even lives there anymore.

And I actually have stuff in the works for this place too, but I'm too frustrated to do anything right now.

Excuse me while I go bang my head on something hard for a while.
Posted by Rich at 3:10 PM 2 comments:

It's time for another funny card all-star. 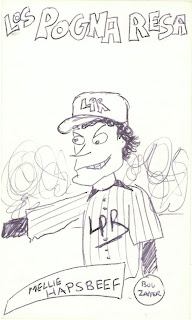 LPR have the best uniforms we've seen so far. They seem to combine elements of the 1980 and 1991 White Sox uniforms, and Mellie makes it look good.

The only other thing that we can determine from the front of this card is that games in this league are attended by large amounts of shrubbery. 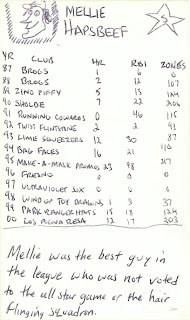 This sort of looks like a Fleer-inspired back, with the little picture in the upper left (in which Mellie looks a lot less nutso.) There's a star with the letter "s" (or is that a number 5?) in the upper right and a whole mess of stats that we'll try and analyze.

Aside from the first two years of his career spent with the "Brogs," Hapsbeef has played for a different team every year he's been in this league. Here's how that breaks down:

As for the stats themselves, they're pretty straightforward. Home runs, runs batted in and then... zones? I think that tracks how many times he "zoned out" during a season, and man did this guy zone out a lot during his career.

I guess he had slightly above-average power, since he topped the ten home run mark five times and the twenty RBI mark also five times. Actually, if you're hitting fifteen home runs and end up with only eighteen RBI for the year, as was the case when he played for the Park Ranger Hats, something's not exactly right. Maybe he was the leadoff hitter. I don't know.

The bio reads: "Mellie was the best guy in the league who was not voted to the all-star game or the hair-flinging squadron." 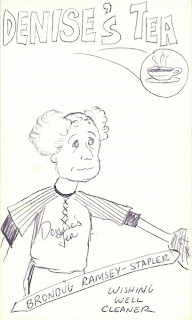 Brondug held the position of wishing well cleaner for Denise's Tea in 2000. Aside from his mad scientist hairdo, this guy looks more like a baseball player than anyone we've featured so far. Clearly he's wearing a jersey and what appear to be baseball pants. He even has an outstretched arm waiting to catch a ball. His team sports a somewhat snazzy logo too.

Let's learn more about him, shall we? My scanner cut off some of the back of this card, but it's all text (a la' 1949 Bowman), so I will just re-type it here, word-for-word.

Born in 1927 and soon fixing acorn catapults, Brondug became a member of the New Brunswick farm team in 1940, only to be released three days later. In 1980, he was hired at Tim Horton's and was amazing at pie slicing. He fell off a log in 1982 and played the banjo for a year before walloping 32 home runs for the t-ball squad his son played on. Had a good year in 2000."
Posted by Rich at 9:56 AM No comments:

Players, teams and cards I collect: